The Lac Simard Property (the “Property”) is about 5 km south of Val-d'Or, Quebec (Figure 1). The Property abuts the southern edge of the Goldex claim block. The location of the Property relative to the major claim blocks containing operating mines is shown in Figure 2. The property is road accessible and is crossed by an all-weather road. The Property consists of 46 contiguous mining titles with a total area of 2560 hectares. 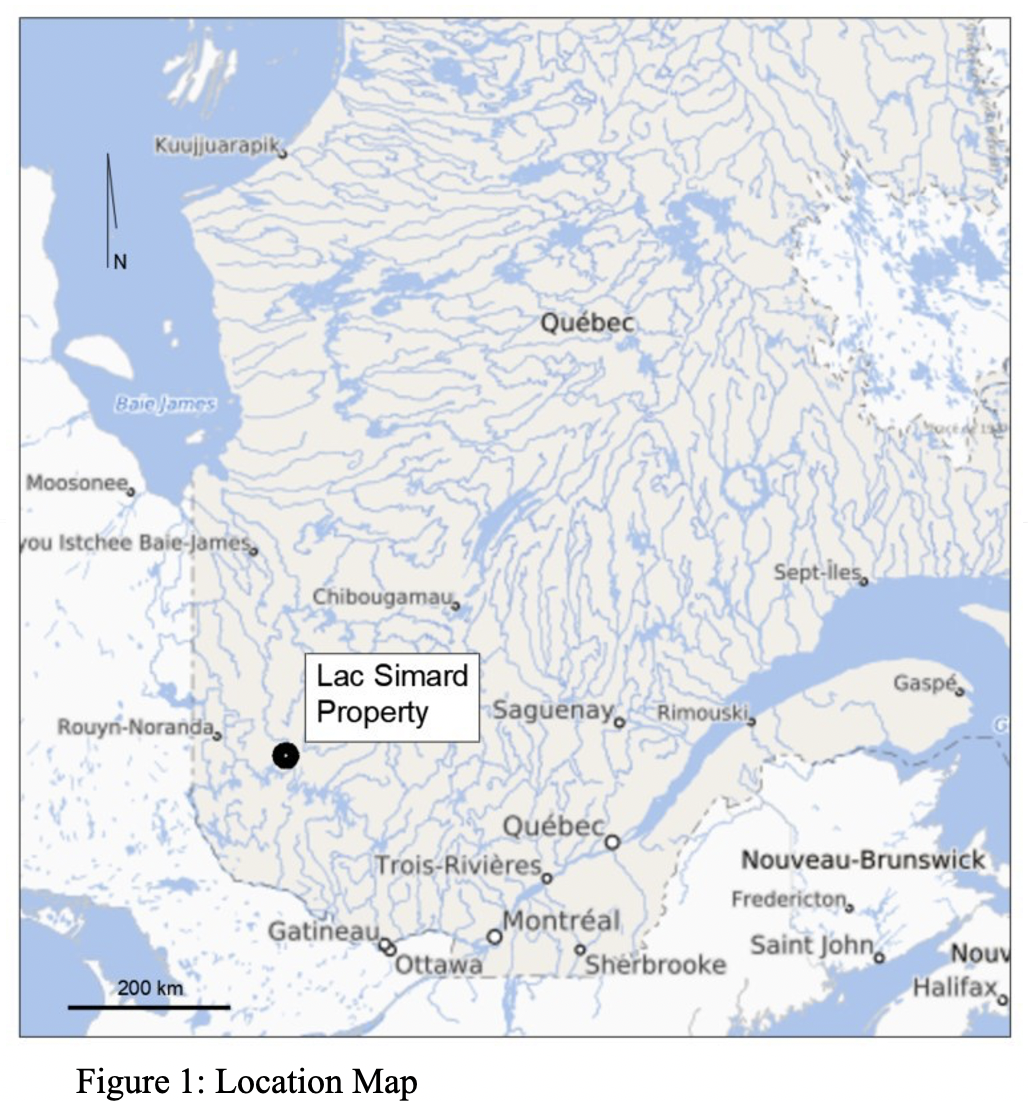 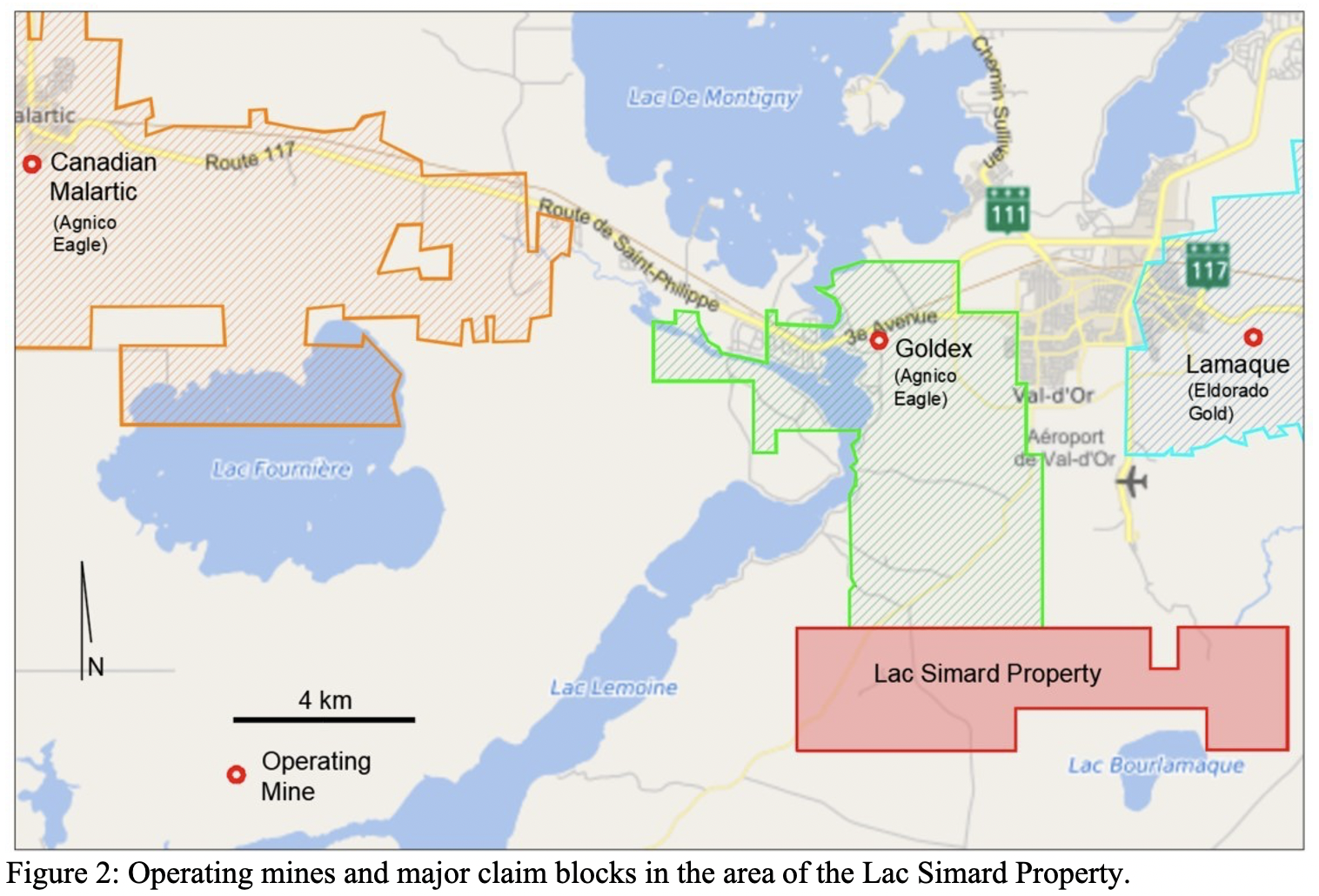 Mines in the area of the Lac Simard Property

There are 3 operating gold mines within 20 km of the Property (Figure 2).

Agnico Eagle's Goldex Mine is 6 km north of the Property. The Goldex Deposit has proven and probable mineral reserves of 1.1 million ounces of gold (21.0 million tonnes grading 1.61 grams/tonne gold) as of December 31, 2019. It is an underground mine exploiting a stockwork of quartz or quartz- tourmaline-pyrite veins and veinlets associated with the Goldex Granodiorite.

Canadian Malartic, also owned by Agnico Eagle (in partnership with Yamana Gold), is Canada's largest operating open pit gold mine. It is about 20 km to the northwest of the Property. The 55,000-tonnes/day open-pit mine and plant produced 662,918 ounces of gold in 2019. It's gold reserves as of 2019 were 2,389,000 ounces. Canadian Malartic is a large-tonnage, low-grade Archean gold system, consisting of a widespread shell of disseminated gold-bearing pyrite mineralization hosted by porphyritic felsic to intermediate intrusions and altered metasediments.

Lamaque is an underground gold mine owned by Eldorado Gold Corp., which declared commercial production on March 31, 2019. It is about 6 km north of the Lac Simard Property. Lamaque is expected to mine and process over 615,000 tonnes of ore at an average grade of 7.0 grams per tonne gold. Gold is found within quartz-tourmaline-carbonate veins, which are hosted within a series of sub-parallel sub- vertical shear zones centered around a steeply plunging cylinder-shaped porphyritic diorite.

All three are considered to be orogenic gold deposits and occur along the Larder Lake – Cadillac Fault System.

The Property is largely underlain by metasediments of the Neoarchean Pontiac Group (Figure 4). 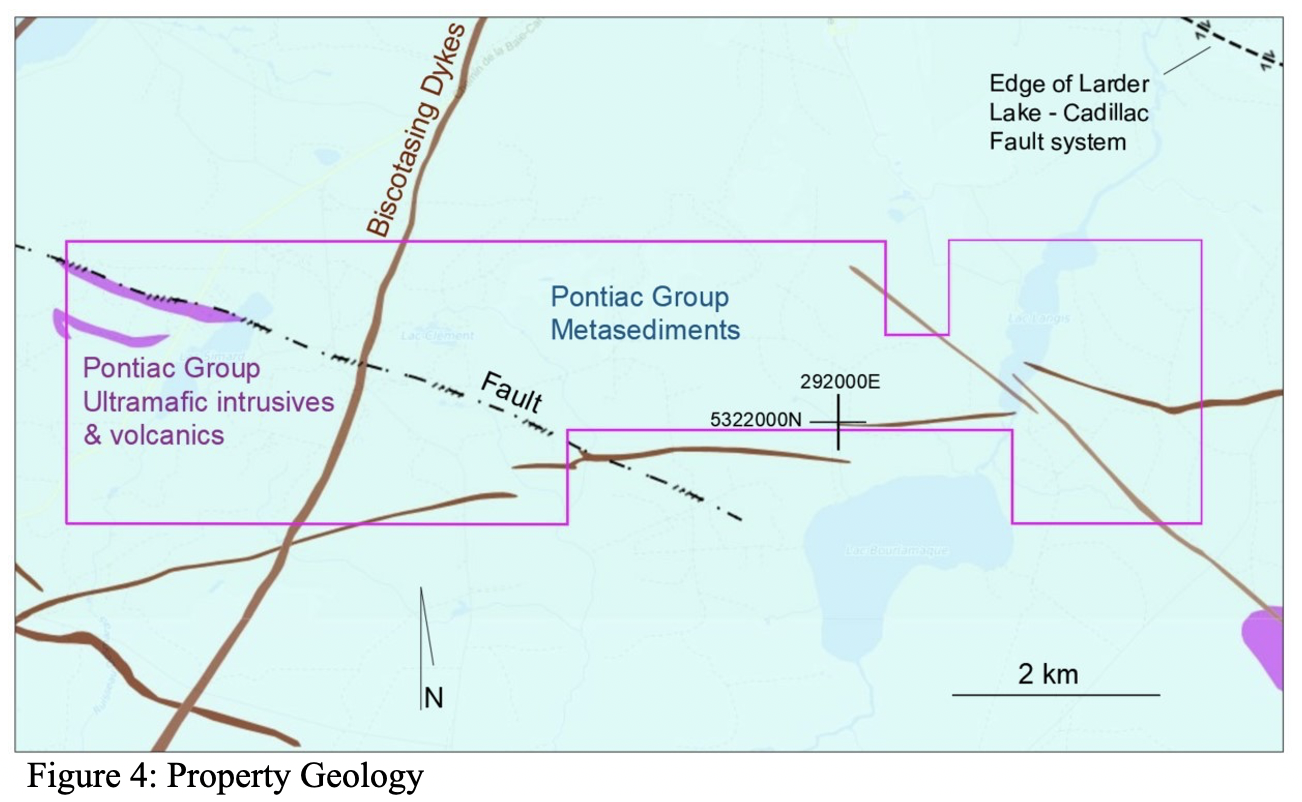