VANCOUVER, BC, CANADA (October 11th, 2022) – Victory Resources Corporation (CSE: VR) (FWB: VR61) (OTC: VRCFF) (“Victory” or the “Company”) is pleased to announce that the Company’s has increased its land claim holdings in the James Bay Lithium District in Quebec, bringing the total claims acquired, staked, and filed to 49. The Company’s Stingray Properties are non-contiguous to the south of Patriot Battery Metals (CSE: PMET) Corvette lithium property in Quebec.

Victory’s exploration team has dealt with technical issues with the Quebec mining registration system (GESTIM) and added to and relocated some if its claims to, expanding from 44 claims announced in July to a total of 49 claims. The array of Stingray Properties as per the map below indicate 4 non-contiguous holdings, south and adjacent to Patriot Battery Metals Corvette Property.

The Stingray Claims are underlain by intermediate intrusive rocks, predominately Granodiorites and Tonolites as well as some granitic rocks. Based on regional geology these intrusive rocks abut the volcanic sequence of the James Bay Greenstone belt.

As Victory’s Exploration team continues to assess additional land claims in the area, it intends to conduct a geologic and surface geochemical survey together with an airborne geophysics survey on the Stingray claims. 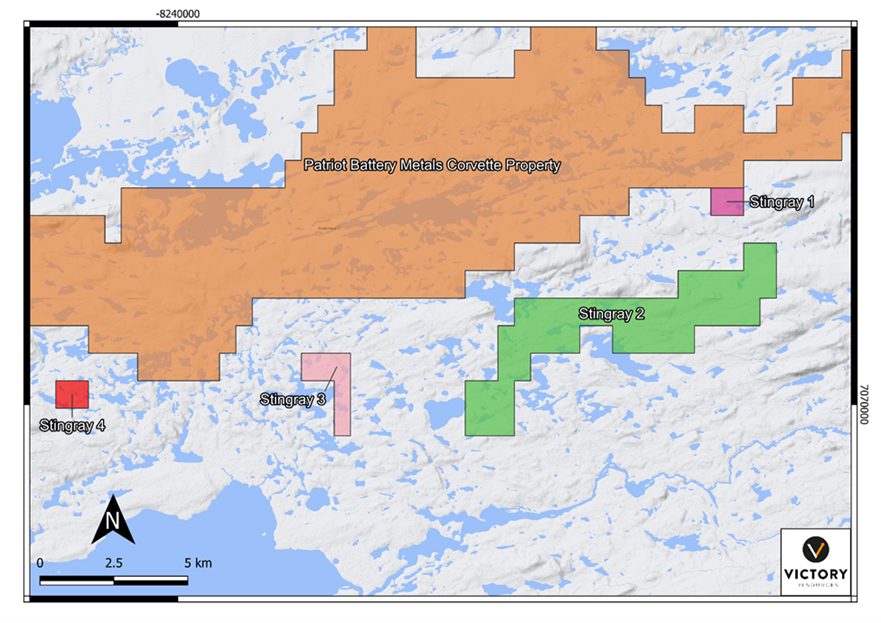 Donald Théberge, P.Eng., M.B.A., an independent qualified person as defined in National Instrument 43-101, has reviewed, and approved the technical contents of this news release on behalf of the Company.